So for those who have been following my blog, you know that I have never revealed exactly where I work at for various reasons. Well for this entry, I am actually letting that info out because I can’t properly tell you about the Joe McGill visit without letting you know where I’m at.

I was first introduced to the Slave Cabin Project like most people…the media. I read about it in the Charleston Post and Courier and thought “Hey, this is really kind of cool, I’d like to meet this guy one day and see what he’s thinking!” Little did I know that I would get to do just that. One of the higher ups asked me about the project over the summer and if I heard about it. “Why yes, I did and I think it’s spectacular!” I always take an interest when people are talking about slave life interpretation or just preserving the history that most feel is unimportant, and said higher up told me that he got to meet Mr. McGill at a conference in Charleston and that he was interested in coming out to our site do to the cabin sleepover.

While we thought it was exciting and appropriate for something like that to happen, we also realized that the decision like that was not just ours to make. Because we are pretty active with our slave descendants, we thought it would be best to have Mr. McGill ask them if it was alright to do this at the home of their ancestors. A meeting was set up and the descendants loved what Mr. McGill had to offer as well as why he was going around doing this. Without further delay, a day was set and the slave cabin project was officially coming to Historic Brattonsville.

After doing a bit of research on the project, and being the one coordinating Mr. McGill’s visit, I noticed that Brattonsville would be the site of  a few firsts, mainly that this would be the first site that Joe would meet with slave descendants. This would also be the first time that he would partake in a living history day at a site. I wanted to not just highlight his stay but also the story of the slaves who we know little about here at Brattonsville, and so I asked some of the descendants to come and share oral histories that they had…stories that many of the staff had never heard before, and they gladly obliged! The day was wonderful and filled with the story of the African Americans who did the work on the plantation. There were kitchen demonstrations, slave life interpretation  (which we have all the time), as well as a tour looking at the plantation from the eyes of a slave. Visitors got to see what Brattonsville would have been like for those who were working the land, not just from those who lived the high life there, and they all appreciated that view.

Once the day’s activities were done, I greeted Mr. Terry James who would be staying with Joe in the slave cabin overnight but I had no idea that he brought original slave shackles with him until this  I thought it was absolutely amazing and while I couldn’t sleep in the shackles, I understand how that could bring one closer to the experience of slavery and how it would make me appreciate the freedoms I have today just a little bit more. I’m so glad that I got to experience everything and I know that This Place Matters! 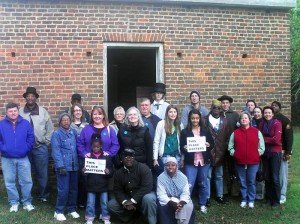 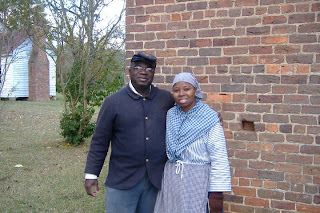