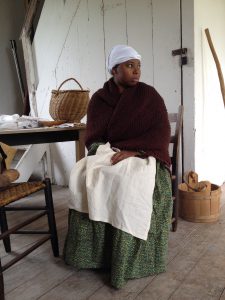 I am a timid person by nature–I like to play the background and do careful, thought provoking and amazing work while back there. However I realize with a business model, this doesn’t serve well, so I work these jitters and moments of slight fear and shyness out before I come face to face with a client. But with that description, I find myself living the exact opposite which takes people by surprise. “But you seem so at ease!” is what I usually hear, which is a good thing. So imagine my thoughts when I received an email from Emmanuel Dabney of the National Parks Service wondering if I would be interested in participating in a living history program at City Point Unit, which is part of the Petersburg National Battlefield. My first reaction was “huh? Living history again?” And I thought these reactions were valid because when someone asks you about portraying someone, you think–“do I have a body of work they have seen to have them reach this decision?” All I had were stills, but was that enough? Apparently, it was!

Emmanuel had read the posts and liked what I had to say. He also liked that he found “another one”.  I got excited because I had been found and in turn found by “another one” (“Another one would refer to another African American interpreter) Arrangements were made and I found myself planning a trip to Virginia. I’m excited at this point but, I’m still admittedly a little nervous. My mindset had shifted from being on site to being behind the scenes in development, programing and research. As a consultant, that’s what I do. So to be asked to do 1st person interpretation, I was nervous. Was there dialect? As an Eppes slave whose family was on the plantation, how did I really feel about the war and a chance at freedom? Would Caroline Corsen (the woman I was portraying) be like most of the enslaved population and be happy for freedom but fearful of what to do next? I realize that Emancipation just meant you no longer belonged to someone else, but it did not give you a place to live, food to eat or a secure means of survival. These thoughts of “what’s next?” would be some of the most important thoughts those still enslaved would have. In all my interpretive time, I’ve always been told not to smile, to be sullen, look down, avoid eye contact, look submissive and have body language that supports these things. I have not managed to do all that. In 1st person I have an underlying attitude of defiance and sometimes it shows itself. That defiance came out in Caroline Corsen. However, I’m getting ahead of myself.

In preparation for Petersburg, I had to figure out clothing. I have the basics, a shift, petticoats, aprons and head wraps, but that’s it. Thankfully, with Emmanuel’s help, I was able to get clothing provided by the Booker T. Washington National Monument and their wonderful Superintendent, Carla Whitfield. She was able to outfit me in a wonderful dress and a wrap shawl that would keep me warm from the very chilly breeze coming off of the James River. Well that was great, and then the thoughts of, ‘who will I be working with?” began. I have a very, shall I say, open approach, to how slavery is portrayed. I’m a fan of 3rd person because it allows “others” to tell the story, but there are some who would rather we not allow “others” to tell the story. Would that be the case here? Would I be able to fit in with this group of seasoned interpreters? 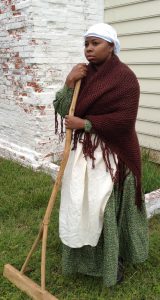 One of the first things I heard was, “Are you the one with the website?” And indeed I was. But that’s not always a reason to get excited. Just because someone has seen it, does not make them a fan. Fortunately, I was with kindred folks. They read it, and liked the content! Yay! When I write here, it’s true that some posts are my simple musings , but most are to expose the reader to a niche, a line of work that people don’t think about. What was making this living history program special was that for once, you would have a large collective of African American interpreters presenting the story of those who were enslaved by the Eppes family. May of us were interpreters who worked at sites exposing visitors to the African American experience during slavery. Best of all for me, I would be working with Miss Kitty (Wilson-Evans) again. I found it very easy to get along with everyone because we all shared a common goal. Emmanuel had written scripts for all of us, but it wasn’t your run of the mill acting. We were telling the visitors about the Eppes slaves: who we were, how long we’d been at the plantation, what we were responsible for. These were historic facts being presented, the type of facts that for so long remained in family papers, letters, diaries and out of the public eye. It was amazing!

Saturday we had damp weather but were able to run through the program twice. Participants in our first group left and came back in time for the second tour with more family members so they could see “their” history being told. That’s the type of response I look for as a historian. This wasn’t a mere moment of entertainment, it was a moment of learning. Sunday, we had just one tour with a very large turnout. There were at least 25 people and we decided to have a little fun. All of us kept to our facts, but there were vocal inflections and delivery that we altered so that you felt it a little more. When Ms. Viola as Sally Webb said, “I think we should just stop talking about this!” in reference to slaves being whipped, she had a forcefulness in her voice that would silence anyone. We went all out and gave an amazing presentation. What I appreciated was that the visitors understood the goal–to teach–and allowed the information to sink in. They had questions regarding the Eppes’ family, their slaves and the Union troops/Grant/Lincoln who would eventually come to the site, that reflected this understanding. That made the event even more fun. Talking about slavery is mentally exhausting. It drains a person because you are recalling this horrifying history and giving it to your public. But our audience was really into the discussion and stayed afterwards to talk to us as a group and individually about our work. Gotta love it. 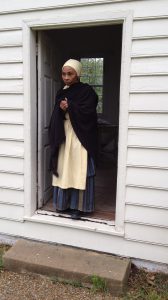 I’m often told by seasoned interpreters that you cannot show any joy in your body. Every ounce of you has to be beat down and somber. Like I said earlier, that’s not something I can do easily because I cannot be convinced that all enslaved men and women were downtrodden 24/7. Even if it’s for a split second, an event can cause one to smile or have a glimmer in their eye. Many are critical of how slavery is depicted, and you’ll very rarely see me used for anything in association with Historic Brattonsville officially because I usually had a smile when I interacted with visitors. I was doing 3rd person but still, looking happy in a photo for official use could be misconstrued as me being the “happy slave”. Being so critical and politically correct for today’s times, you can miss something important. Slaves had situational awareness. They knew they were property. Around those in positions of power over them (ie: white folks) they played that role. Amongst themselves, with loved ones or even alone, I bet a smile crossed more than one face. In those moments they were human and no one could take that moment away from them. In other words, they may be viewed as property but try as they might, slave owners could not control the thoughts of their “property”. I take that knowledge and present THAT to the public. What you may think is an acceptance of slavery is just me reflecting the situational awareness and allowing you to see a personal moment that many of the enslaved had.

As Caroline Corsen, I had a sly smile as I talked about my husband Henry getting 15 lashes. I’m not smiling because he was whipped, I’m smiling at why he got them. Henry was whipped because he stole a boat twice just to see his wife. He had a love so strong that he literally risked life and limb to see her. A dedication that strong should make anyone grin a little. People worry about how historic sites aren’t doing enough to humanize those who were slaves, yet, you put restrictions on how one should

reflect being human. I feel it’s important to be able to convey the complexity in slavery. That’s why you’ll see me smiling and getting excited when I interpret in third person. I’m happy to share the things I’ve learned and to pass that information on.  It’s about getting others to see the different spheres that occurred within the realm of slavery, whether urban or rural. To be able to give you what unfortunately rare glimpse in into that life brings me joy. Sue me.

The only sad thing about the program is how many people afterwards wanted to know if we were a travelling group of interpreters. It’s sad because there aren’t enough African American interpreters out there. Many are older, so it was a special treat to work with Mia who interprets down in Georgia, and Emmanuel who are a few years younger than me. It was also great to work with Julie, our lone white woman, who works at the Frontier Culture Museum and is an amazing talent. If there can be 100 more Mias, Nicoles and Emmanuels, the way people learn about slavery can definitely change. It shouldn’t be a celebration that 10 of us can get together. It should be a regular occurrence. But that’s another rant for another time. You didn’t make it down to City Point? No problem. Check out the pictures and my friend Annemarie Beebe, the Executive Director of Historic Rock Hill snagged my presentation. Enjoy!