The world of African American Historic & Cultural Interpreters is a small yet spread out one. But fortunately the internet, events and introductions are bringing this world closer together, and one of my goals is to showcase interpreters making this story happen. So I’ve reached out to a few people I’ve met, or worked with and invited them to tell their story in the form of a post. So far, I have three lined up and I hope to keep expanding.  In these posts I’ll do as little talking as possible and let the guests speak for themselves. First up is Clarissa Lynch. 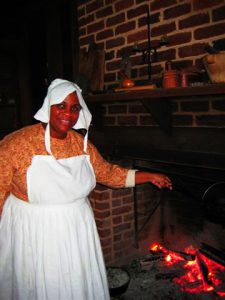 As a child Clarissa Clifton would search her grandmother’s wood burning stove looking for the knobs to turn it on.  After all, Grandma Lillie was always waiting for the weather to get cool enough to ditch her gas burning stove and cook on her wood burning stove.  This was the start of Clarissa’s fascination with food history.  Today she can be found doing living history demonstrations at Latta Plantation and other historic sites.  She loves to discuss recipes and cooking methods before it became out of fashion to use a biscuit to sop up some pot likker from a plate of Crowder peas.

Why Do I Love Sukey?

I started interpreting the life of an enslaved cook in 2000 at the Tullie Smith Farmhouse in Atlanta, GA.  Though I have always had a passion for food history I didn’t realize how my passion would include telling the stories of the women and men who survived such dehumanizing conditions.  Sukey is the slave I am currently portraying at Latta Plantation in Charlotte, North Carolina.  Sukey has allowed me to see past the one dimensional caricature often shown by Hollywood to the woman with many facets.  Sukey is allowing me to convey more of her story than just being a cook.  Sukey was also mother, grandmother, and wife who longed to see freedom for herself and her descendants.  She survived the Civil War to see freedom and to have her name recorded in the 1870 census.  Researching family letters connected to Latta I also know that Sukey made no secret that she wanted her freedom and could see it coming.  She was not a passive woman who accepted life as it was.  Instead she had a dream that life could be more for herself and those she loved.

Sukey allows me to move past the sanitized version of slavery that has been promoted for so many generations.  The plantation lifestyle was definitely not sustainable since it required the labor of humans held in bondage with the threat of physical violence that could include death.  As I’ve gotten older I definitely appreciate the rare opportunity I have been given to share not just Sukey’s skills as a cook but also her story as a woman. 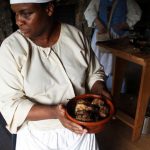